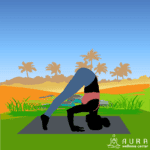 Yoga history deserves more than a brief tour. However, my intention is not point out that yoga has been around for thousands of years and the point of origin is India. Is there any justification in the idea of yoga being a recent phenomenon? Yoga outside of India began catching on long before New Agers became interested in Eastern practices and philosophies, and within a generation yoga has expanded into a global industry. It’s taken on all the trappings of consumerism, designer-name clothing, high-priced retreats, and special diets. So it may be prudent to step back and look at the highlights of its history.

We know yoga has been around for thousands of years. For archeologists, yoga history starts with a search for artifacts. There are yoga postures carved into stone seals dating back to 3,000 BC. This was the age when one of the first great civilizations of antiquity flourished in northern India. Scholars believe that Yogic principles are based on ancient shamanic practices, but turned inward to a self-discovery of divine nature as it was embraced by higher culture and thought.

Yoga history was not recorded until the Vedas became written scriptures. Before that, it was the knowledge within the Vedas that were transferred by word of mouth. The oldest known yoga teachings are found in the Vedas, the sacred scripture of the Brahmans and early Hinduism. The Vedas are steeped in ritual and verse. People relied on Vedic holy men, or rishis, to teach them how to live in harmony with divine principles. We have the first references to yogis living alone in the wilderness. This was thought ultimately to bring them visions of higher reality.

With the Pre-Classical period, Yoga history becomes high tech as it is entered in written format. A new literature, the Upanishads, marks the next evolution. These scriptures were based on inner vision gained by devotion to Brahman. They further explore the teachings in the Vedas, but involved the relationship between ultimate reality (Brahman) and transcendental self (atman).

Around 500 BC the Bhagavad-Gita built on the teachings of the Upanishads. It describes Bhakti (devotion), Jnana (knowledge), and Karma (selflessness) in opposing evil. The Gita examines these in a conversation between heroic Prince Arjuna and the holy Krishna.

Now, yoga history leaps forward, a third text marks a Classical Era: The Yoga Sutra, written around 200 AD by the sage Patanjali. He believed that every person is composed of matter and spirit, and that the two must be separated for the spirit to be pure. This was a departure from earlier teachings that taught body and spirit should be nurtured together. This work is composed of 195 wisdoms that represent Patanjali’s Eightfold Path (Eight Limbs).

Patanjali’s ideas dominated for centuries, until yogis began to feel that practitioners were neglecting their bodies. Indeed some yogis began to expound on ascension of body and physical immortality. Gradually modern yoga became less focused on the fantastic and more on living in the “now”.

Yoga was introduced to the rest of the world as a result of Great Britain being a super power at the time. It helped spark the metaphysical ideas of the early 1900s, such as Theosophy, and within a few decades was growing as a practical approach to mental and physical well being. The counter-culture of the 1960s saw a flood of Eastern ideas into mainstream Western culture.

Once again, the physical aspects are stressed, and the spiritual side ignored, but it clearly doesn’t have to be both for everyone. The reason behind the timelessness of yoga is that it’s an excellent technique for producing whatever result you may be looking for. As we consider yoga today, I am reminded of a class taught by Paul Jerard, when he explained to us that the yoga we see today will change in time as it has always evolved throughout history. People will always be attracted to yoga for physical, mental, emotional, or spiritual comfort and there will always be a style to meet our needs. Yoga history is being made at this moment and we are in the middle of an information expansion that no single person can consume.